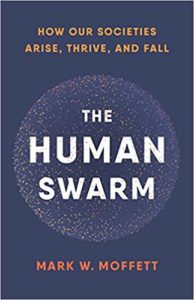 “Our times are filled with garage start-ups that become Silicon Valley behemoths overnight. Such scaling-up pales in comparison to humans going from hunter-gatherer bands to our globalized world in the blink of an evolutionary eye – and thus now, a stranger a continent away can be killed when we press a button operating a  or rescued when we press a button marked “Donate now.” In The Human Swarm, Mark Moffett charts the science of this scaling up of human  and its unlikely evolutionary consequences.  This highly readable book is ambitious in its interdisciplinary breadth, rigorous in its science, and deeply thought-provoking in its implications.”

Posted in Reviews for the Human Swarm
Scroll To Top