Army ants are ant species in which the workers search for food in groups (classically that food is live animal prey, but some ants efficiently take plant matter by this means, too).

The idea sounds simple but even some experts are confused about what it means to forage in groups, so let me go into the details of how the phrase has been used. 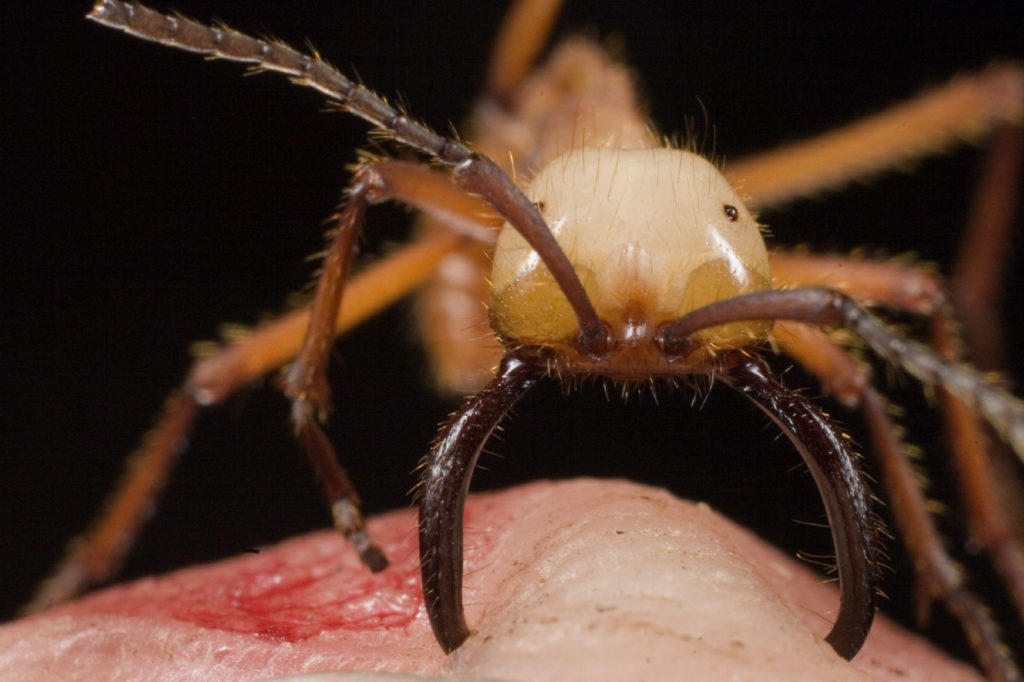 Hunting together is often called group predation, or, my own preference, mass foraging. (The problem with "group predation" is the phrase often has been applied loosely to a situation in which more than one worker catches or carries off prey—actions that are widespread in many ants other than army ants; nor do army ants necessarily catch or carry each victim as a group, even though they search for their quarry as a group.

Indeed, the term "army ant" brings to mind a concentrated (and often huge) mass of predatory ants on a hunt together, and it was in fact used specifically to denote such “mass foraging” species, such as the Carebara [Phieodologeton] silenus (aka "marauder ant") raid shown in the image below. That changed when E.O. Wilson showed (in a 1958 article in Evolution) these species also tend to be nomadic, that is, change their home location frequently (and sometimes regularly). Since then, other authors have pointed out even more traits that also tend to be associated with ants traditionally called “army ants,” notably, that the queens are wingless and physogastric (bloated with eggs); the food and brood are carried slung under the worker's body; "nests" are produced by workers linking their bodies together, in some cases yielding an exposed mass of resting ants called a bivouac; and the societies reproduce by fission—permitting a young queen to start a new colony assisted by part her mother’s worker population rather than on her own. 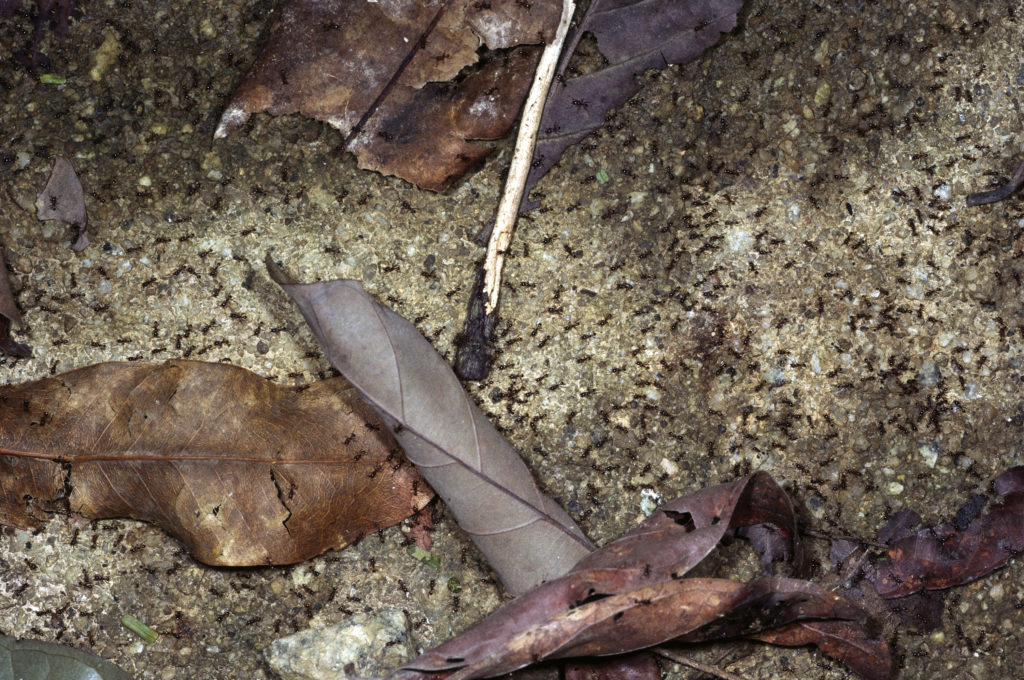 Varied combinations of these traits have been treated as a “syndrome.” While this army ant syndrome can be a valuable idea, when it comes to the usage of the term "army ant" each additional trait should be regarded as a proprium (a term philosophers employ to describe a nonessential property common to examples of a thing, but which nonetheless isn't a defining trait). This is so for three reasons: 1) there are examples of undoubted army ants that show these traits at best weakly (some Doryline army ants can stay at one nest site for months if not years and so appear to be no less sedentary as many other ants; for example, undisturbed colonies of the Asian Dorylus laevigatus stay in one place almost indefinitely); 2) none of these traits are unique to mass-foraging ants (see the image at page bottom for a nomadic "herdsman" ant); and 3) the one characteristic that is unambiguously unique to army ants was clear even to early biologists: many ants stream over long distances, with food being found and collected at every step in their advance. 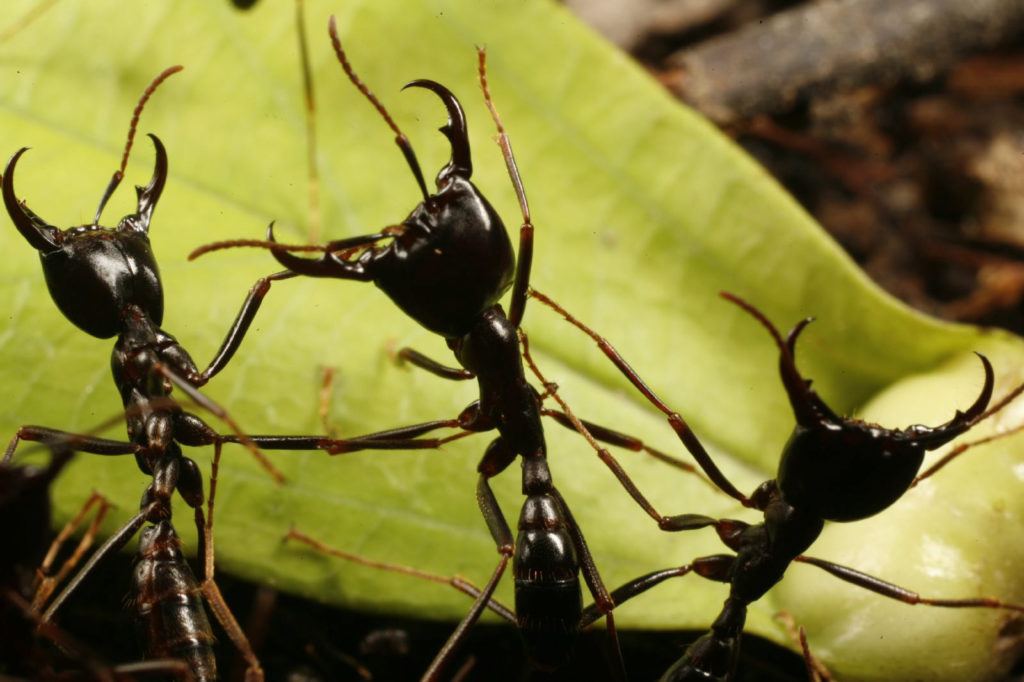 An unfortunate consequence of defining "army ants" in terms of a suite of oft-connected traits (the “army ant syndrome”) has been that mass foraging itself has been neglected, to the point that it is usually unclear from reading the literature what is truly distinct about army ant foraging. Indeed, the evolution of mass foraging is almost untouched as a topic: how have army ants, the marauder ants, and a few other species come to search blindly as a group? As a result of this muddle, certain species in which multiple ants can kill or carry prey together but that forage alone in a manner antithetical to army ants are still mistakenly referred to as army ants. (In such species, the search for food is conducted by long-distance scouts acting alone rather than by advancing throngs.)

For this reason it’s my hope that future researchers will focus more on army ant style raids, as far as I’m concerned the pinnacle of foraging behavior in the animal kingdom. I also hope my arguments put forth in the book Adventures Among Ants lead the experts to return to defining "army ant" based on the one trait that is truly diagnostic for them: mass foraging. This revision would disengage the term army ant from the different though no doubt useful idea of an “army ant syndrome.” The ants showing this syndrome include nomadic ants that employ long-distant recruitment by scouts to capture prey, among them species that lack mass foraging such as Leptanilla, Onychomyrmex, Pachycondyla analis, and certain Leptogenys. One author who’s made a clear statement of this critical distinction is Sean Brady.

Three Questions that Come Up

No. Certain army ants find and eat some vegetable matter during raids, and marauder ants consume as much vegetation as animal flesh. It is entirely conceivable, though perhaps unlikely, that a completely vegetarian species could employ this hunting strategy, for example to drive off competitors.

Does mass foraging necessarily involve a large mass of ants?

No. Though we expect this strategy to have the most benefits when the number of participants is large, and certainly species with the largest swarms receive most of the attention, the raids of some ants can be in the hundreds. I can even imagine two workers hunting as a team: As long as they stick together and one isn't simply leading (recruiting) the other to a food item, the pair would be "mass" foraging.

Could any ant species forage both in groups and solitarily? While such a mixed strategy is imaginable, no actual examples are known; the marauder ants forage entirely in raids (mass foraging), as do driver ants and the other "true" army ants discovered to date.

Army ant. Formally, the term army ant should be applied solely to ants in the subfamily Dorylinae, all of which mass forage and most (but not all) of which show the army ant syndrome.  However, the phrase is widely applied to any kind of ant that mass forages.

Foraging. The search for food (all the behaviors that lead up to first locating a food item), as distinguished from harvesting food. An individual searching for food is a “forager.”

Group predation. I follow what I interpret to be the usage of most researchers, and use the term to describe any situation where multiple individuals work jointly to forage, harvest, or retrieve a live prey item. This term comes up most often for prey that is difficult to catch because of its large size or vigorous defenses.

Group transport. Carrying of a food item by multiple individuals.

Harvesting describes all the steps that ensue outside the nest after a successful bout of foraging—that is, after food is found. These include such behavior as recruitment of assistance to the food, killing prey, dissecting food into pieces, and transporting those pieces to the nest (whether by single individuals or by group transport).

Mass foraging. Multiple individuals search for food together (whether they harvest or retrieve the food together after they find it isn’t relevant: see "group predation"). In army and marauder ants, there is a continuous stream of participating workers rather than a specific set of individuals. This is why I prefer the term "mass foraging" over the more widespread but misleading phrase "group foraging."

Mass recruitment. The harvesting of food in which a scout recruits a stream of individuals to the site where she found the food.

Scout. An ant that forages on her own but recruits assistance when she finds food she cannot handle on her own.

Solitary foraging. Single individuals depart (for example, from the nest or from a trail such as a trunk trail) to search for food alone. 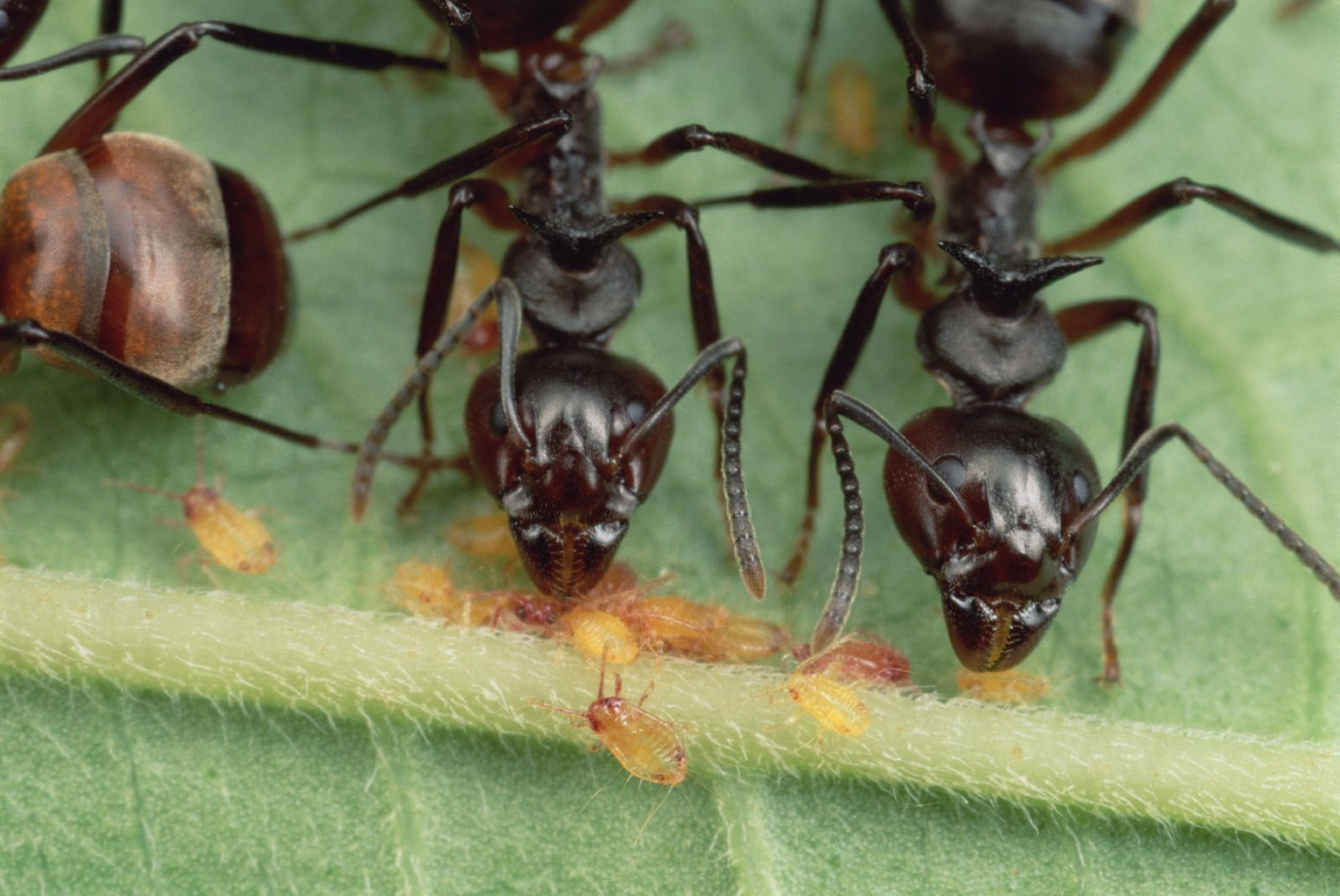 Image above: Malaysia’s herdsmen ant shows characteristics of the "army ant syndrome" (it is nomadic, with physogastric queens and exposed, bivouac nests) and yet is a mealybug-tending species that forages solitarily.