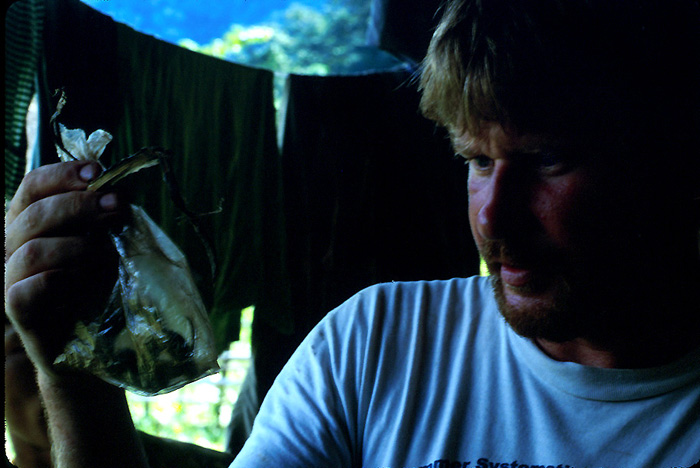 Taken September 10, 2001, the day before the snake bite, holding a bagged serpent given to him by a villager at Rat Baw. © Mark W. Moffett

Joe on September 10, 2001, the day before the snake bite, holding a bagged serpent given to him by a villager at Rat Baw.  © Mark W. Moffett

This is to inform you -- although you may have already heard through U.S. Consulate reports to the California Academy of Sciences, based on radio reports relayed from our team while in the field -- of the tragic death of Joe Slowinski from the bite of a multi-banded krait (Bungarus multicintus) at the village of Rat Baw in a remote site in northern Myanmar (Burma). After an exhausting week (during which we walked over 60 miles through terrain so thick with leeches that the puddles we passed through sometimes became tinged red with blood), Joe was bitten on the 11th at 7 am.

I was standing beside him when he casually picked up a pencil thin, foot-long snake -- which he did believing it was a nontoxic mimic Lycodon, an assumption based on the fact that the snake had reportedly already bitten the Burmese assistant who caught it the day before.  Joe immediately recognized his mistake, but could detect no abrasions on his finger.  He sat down to breakfast, lay down for a nap by 7:30, noticed a tingling in his muscles by 8 am.  At 8:15, two assistants were sent to run to the nearest town with a radio, 8 miles distant. Joe calmly outlined what might happen to him and what we should do.

Through the morning his voice was reduced to a slur, and in time he could only write us messages. By 1:00-1:30 he could no longer breathe on his own, and we began mouth-to-mouth procedures.  These stretched on continuously for nearly 26 sandfly-infested hours -- during the tragedy at the World Trade Center, which we only learned about yesterday.  At 3 pm our runners returned to us with a request from the military for updated information before a helicopter could be sent.  Fresh runners were sent back, again urgently requesting a helicopter.  By evening the weather turned too bad for a rescue flight, and the rains continued through the next day.  By 4 am Joe could no longer signal us with his big toe.  By 12:25 pm Joe's heart had stopped and we began 3 hours of CPR in anticipation of a rescue helicopter that never was able to land.

Official time of death is 12:25 pm on the 12th. Airlift was only possible the following afternoon.

At the request of his family, Joe's remains were cremated today. Several researchers are still deep in the field at this time.

Everyone respected Joe, and several present clearly loved him dearly.

The trip had been very successful for Joe, with new species of snakes and lizards. He was proud of his work in Myanmar, and especially his research team there.  He was brave throughout his struggle, and calm to the end.

For a full story of the events of that trip, written fresh after the events happened, please see my article in OUTSIDE magazine, reprinted in Adrenaline 2002:

I wrote this poem on my way out of Burma; it was published in the 2004 book The Back Road to Crazy:

Last night, dreaming,
I saw again that thin, grey-banded snake
in ropey grass.
A krait, inches-long cousin to the cobra.

Its heart beat a serpent's rhythm.
Long and measured. Slow and careful.
Like the pulse in the wrist of a dying friend.
Who is to say which deserves to live,
the friend because he is a friend,
the snake because its movements
whisper perfect through the dew-bent grass?
Who can say which one's heart beats a greater truth?
My friend’s because he loves the snake.
The snake’s because it fears the man.

It might take the krait its lifetime
to make one poison drop
the size of the tear that sits in my friend’s
unblinking eye.
Kneeling over Joe, I hear his heart.
Still drumming a man's rhythm, yes,
but indistinguishable now from the snake's
as it fades
like a whisper slipped into wet grass.

The grey bands flash and vanish.
The squatting tear evaporates.
A love past fear plays out its final beat. 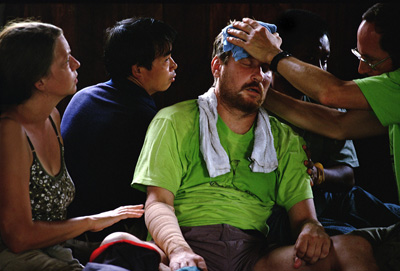 JOE SLOWINSKI, 4 HOURS AFTER BEING BITTEN BY A POISONOUS KRAIT SNAKE, SURROUNDED BY COLLEAGUES AND FRIENDS, BURMA